Oh hey. It’s been a year and half, but I didn’t forget you She Cooks Up Nice. I just bought a 100 year old home and restored it. And taught 100 kids how to read and write. And recycled about 7 years worth of recipes. But I’m back and badder than ever!

Hubby’s birthday was last week and I was inspired to make something delectable for a most delectable man. Last year I made him key lime pie for his big 3.0. and needed to change it up. He loves banana cream pie (I had never eaten it, to be honest) so I wanted to make him a homemade pie, but one that I would enjoy, too. Hence the chocolate. I did some research online and fused a few recipes together and it was awesome!

1.5 packages of graham crackers (so half a box)

1 package of instant vanilla pudding (note you will need milk for the puddings. The box called for 2% or whole milk, which I don’t have, so I combined skim with some heavy whipping cream)

The crust: Preheat the oven to 350 degrees F. Grease your pie dish (in the past I didn’t and the pie was hard to remove when serving. Greasing it solved this problem). With a food processor or a zip lock bag and rolling pin, powderize (not a word but should be) your graham crackers. My food processor is pretty small so I did this the manual way. It’s actually pretty easy. Just make sure you remember to zip the bag closed first ;). Add in your melted butter and sugar and mix all together. Pour the mix into the center of your pie dish and press firmly with your clean, bare hands to create a crust. Bake for about 8-10 minutes until you see a little browning on the edge. Remove and set aside to cool. I actually got impatient and refrigerated mine for a bit. Shut off the oven because you are actually done baking. Nice.

The filling: Break up the dark chocolate bar and microwave it in a bowl with the Tbsp of butter and a splash of milk. Microwave for about 20 seconds, stir and check it, and microwave again until melted. Pour this into the graham cracker crust to form a nice dark chocolate layer on the bottom. Place in the fridge to let it set.

Make both your puddings and set aside. Remove the pie dish from the fridge and pour in the chocolate pudding. Then layer on rings of chopped banana. 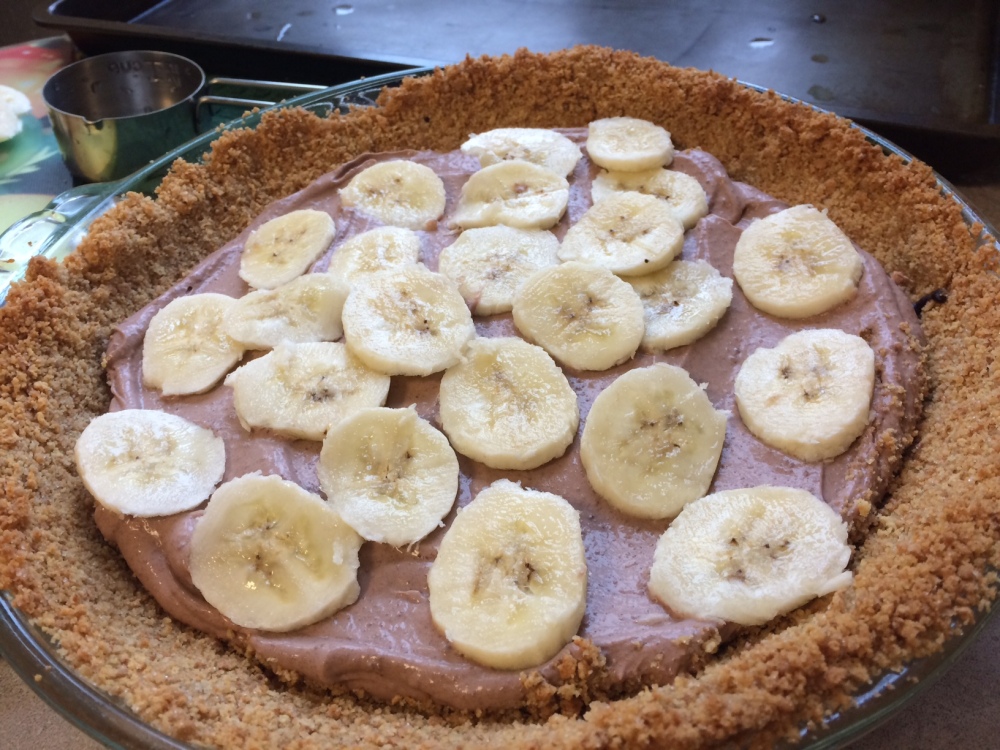 Refrigerate until about 15 minutes before serving. I would freeze for 15 minutes for easier cutting. Just before serving put a last layer of banana (if you do it before they will brown. I had to pick mine off and put fresh ones on). Decorate the top with whipped cream and some shaved dark chocolate. Drizzle with chocolate syrup.

I wish I had taken a picture of the final decorated masterpiece, but alas, it was eaten.