The hubs and I recently went to Key West and had an amazing time. We rented a mustang convertible in Fort Lauderdale and drove all the way down the keys. Of course we had amazing seafood along the way from delicately cooked mahi-mahi, to conch fritters and spicy tuna sushi. YUM. Our favorite meal was at the trendy Nine One Five on Duval Street. We were there for at least two hours and by the end it was clear our male waiter was totally infatuated with my husband. What a blast!

Our entire meal was amazing but we had one simple appetizer that was to die for. They were called Devils on Horseback and the menu description is copied below:

There were 5 on the plate and I earned serious points by graciously letting the hubs eat 3.

When we got home we were pretty bummed since we had such a great vacation. I had some figs in the fridge that I’ve been meaning to use up so I thought I could try my own version.

It was very simple. I tried wrapping the bacon several ways to see which way stayed on the best. Honestly all 3 methods worked just as well.

Slice your raw bacon length-wise so they are thin long strips. You can wrap these strips around the figs as they are or cut them in half the long way before wrapping. You can also use toothpicks to attach the bacon to the fig. I tried all 3 ways and found them to work equally well. When you wrap the bacon try your best to not let the bacon overwrap too much.

Cook in a stove-top pan until the bacon is well-cooked. Serve! Next time I might try to get some kind of spicy apricot dip to replicate the restaurant’s citrus sauce. Super delicious. This would be a great hors d’oeuvre at a party. 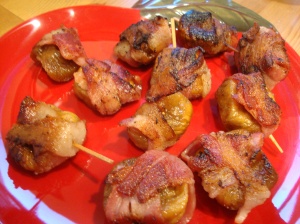